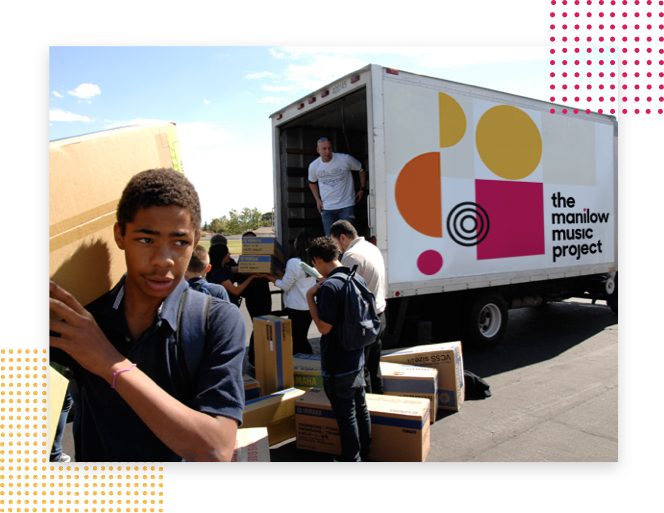 To celebrate his upcoming 500th performance at the Westgate,  Manilow is launching a nationwide search for one high school band to win $100,000 of musical instruments and uniforms in response to budget cuts in public schools.

In 2008, Manilow formed The Manilow Music Project (MMP) and has conducted instrument drives to benefit local schools in most cities where he has performed.  Manilow has personally donated a Yamaha piano to launch each local instrument drive and also sponsors generous scholarships at national and international colleges and universities.  To date the Manilow Music Project has donated upwards of $10 Million in instruments and scholarships.

“I personally benefitted from music programs when I was in school, and I’m thrilled to be able to help bring the gift of music to these kids,” states Manilow.

Schools will be asked to upload videos explaining who they are and why they need the instruments.  Several factors will determine the winner, including online votes, community involvement, and level of need, but Mr. Manilow will ultimately choose the winning school.  Submissions are open immediately and will close May 2nd, with a winner chosen shortly thereafter.  Schools can submit their videos at
https://manilowmusicproject.strutta.me

The Manilow Music Project is part of The Manilow Fund for Health and Hope.  It was formed as a organization to assist local charities and programs.  Its primary focus is to provide musical instruments to high schools and middle schools and to provide music scholarships at universities throughout the US, Canada, and the UK. For more information on The Manilow Music Project, please visit http://www.manilowmusicproject.org/.

Having sold more than 85 million albums worldwide, Barry Manilow is one of the world’s all-time bestselling recording artists. The GRAMMY®, TONY®, and EMMY® Award-winning musician has had an astonishing 50 Top 40 singles including 12 #1s and 27 Top 10 hits. He is ranked as the #1 Adult Contemporary Artist of all time, according to Billboard and R&R magazines.

ABOUT THE MANILOW MUSIC PROJECT

The home of legendary performer Barry Manilow, the property features entertainment options in the International Theater and the Westgate Cabaret and has recently undergone a more than $250 million renovation, that has encompassed every square inch of the property, including the addition of 300 timeshare villas, the all-new International Bar, a fully renovated pool deck, 1,200 remodeled Signature Rooms featuring the all new LUXE Rooms and the luxurious Serenity Spa in Las Vegas, which was awarded the 2017 Forbes Travel Guide Four-Star Award. For more information or to book our hotel in Las Vegas, call toll free at (800) 732-7117 or log on to WestgateLasVegas.com.