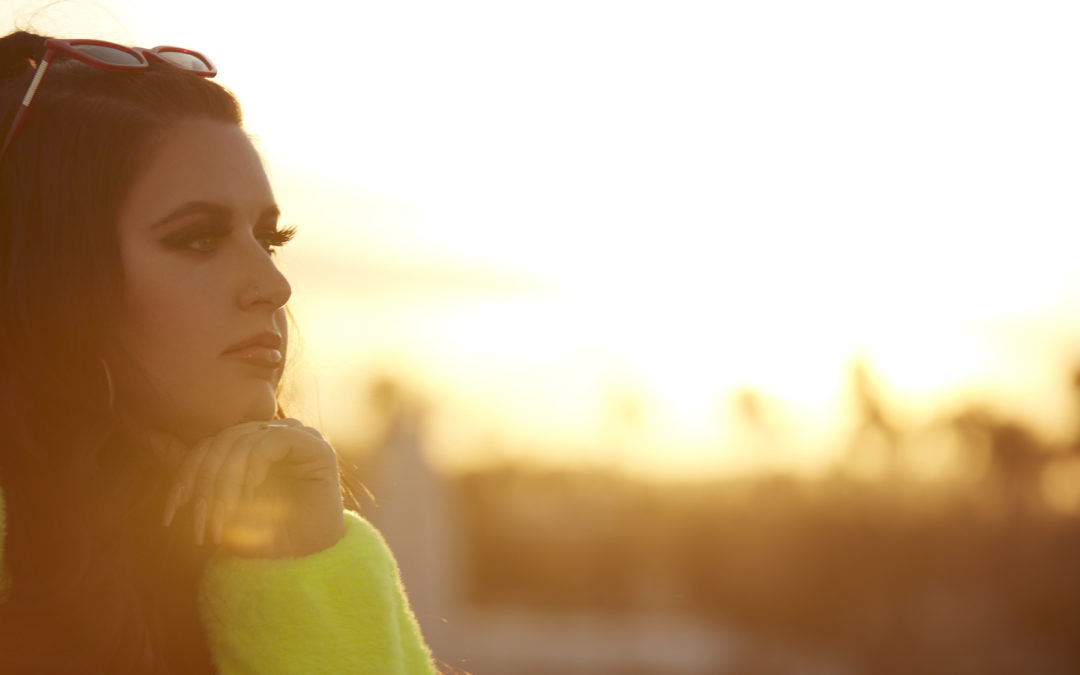 You may not know her name yet, but Malia Civetz is quickly becoming a big deal in the music business. Her talents for singing and songwriting have got the attention of Warner Records and Warner-Tamerlane Publishing, with songs like “Champagne Clouds,” “Heart Broke,” and “Disrespectful” blowing up on Spotify.

We caught up with the rising star and she told us the fascinating story of how her journey to success all began when she caught the attention of the one and only Mr. Barry Manilow.

In 2012, when Barry released the album 15 Minutes, a thematic album about an artist who wants his 15 minutes of fame, he decided to host a contest to give an up-and-comer their 15 minutes of fame. Little did he know he was about to find a talent so special she would require a lot more than 15 minutes.

“My dad got an email from one of his work colleagues saying that Barry Manilow is having a competition. ‘I know your daughter sings; you should have her try out for it.’ So when I got the email the competition was literally two days from being over and there were all of these people that had already submitted videos, and some of these videos had thousands and thousands of likes and I was like—all these people’s videos are already doing really well so I don’t know how I’m going to win. But I’ll just see what happens.”

“I submitted a video of me singing ‘Out Here On My Own’ from Fame and a couple of months later we received an email saying that I won! I was like… wait, HOW? Literally how?”

“We skimmed through all the videos, and Barry watched the best ones and he picked you,” a representative for Barry said.

She continues, “We met under the stage at The Paris (Las Vegas), and I got to work with him and his music director. It was super cool for me because at the time I was at a performing arts high school, and I was a theater major so I’m around music all the time and so to meet and get to work with Barry Manilow was really cool.

“We rehearsed a couple of songs and he said, ‘Practice these’ and we worked on the arrangement, and he gave me notes on the performance and gave me all these tips and said, ‘When we do sound-check you’ll perform both of them, and we’ll see which one is better, and we’ll put that one in the show.’

“So we get to the day of the show and we do the soundcheck and I sang both songs and he’s like, ‘Eh. They’re both so good. Just do both of them,’ and I basically fell to the floor.

“I have this memory clear as day of the stage manager running over shouting ‘No, no, no, no! We can’t add any more songs. The show is already too long! The casino won’t let us go over a certain time limit.’

“It was his closing weekend and he was like, ‘Just take some of mine out! Take this one out. Whatever, I don’t need to do that one.’

“I thought, ‘Are you kidding me? You only have three shows left here! You’re willing to take out your song so that I can sing another song? That’s incredible!”

When Malia’s moment in the spotlight came, she made her new mentor very proud. She wowed the audience with soaring vocals on “Out Here On My Own.” Barry always gives his audience what they want, and it was clear they wanted more Malia. She brought down the Paris Las Vegas with Kelly Clarkson’s “The Trouble With Love.”

“I did the first song and then Barry asked what I wanted to do for school, and I said I wanted to go to USC’s pop music program. My family has always been super down the middle-middle class, and USC’s very expensive. I was kind of struggling, figuring out if I got in how I was going to pay for it.

“Thank God I was a nerd, so I got a bunch of academic scholarships, but because the pop music program at Thornton (USC School of Music) was so new, they didn’t have many scholarships. I found out about the Manilow Music Scholarship and then applied and got the scholarship.

“Barry was so kind he literally wrote a letter of recommendation for me that was one of the most beautiful things anyone has ever said about me.

“He invited me backstage at his birthday show at the Hollywood Bowl, and I told him that I did get into USC and I needed a job. He said, ‘Just work at Stiletto… John! Get her a job!’

(Editor’s note: Stiletto Entertainment is the company that manages Barry as an artist, owned by his manager Garry Kief. John [Adams] was Stilletto’s VP of Marketing)

“It was insane being a freshman at this massive management company. I was technically the ‘marketing intern,’ but I’d work in finances or work on Lorna Luft and Barry’s Facebook pages.

“It was such a crazy time. I didn’t have a car but both of my parents work in the travel industry. So my dad had a friend who works for a car service and he pulled a favor—so I was the freshman intern at Stiletto who would show up in a Lincoln Town Car!” She laughs. “It was so ridiculous because it made me look so much fancier than I was.”

You can still hear the disbelief in Malia’s voice that a music legend would cut his own song from one of the final shows of a tour to give her more time in the spotlight. Her tone is almost mockingly nonchalant as if to drive home the point that each time Barry had the opportunity to help her, he did so instinctively, for no other reason than believing in her talent.

Malia’s story doesn’t end there. Come back next month to read how she went from “marketing intern” to rising star…

If this is your first time meeting Malia, you’re welcome! Catch her latest music and videos at the links below: