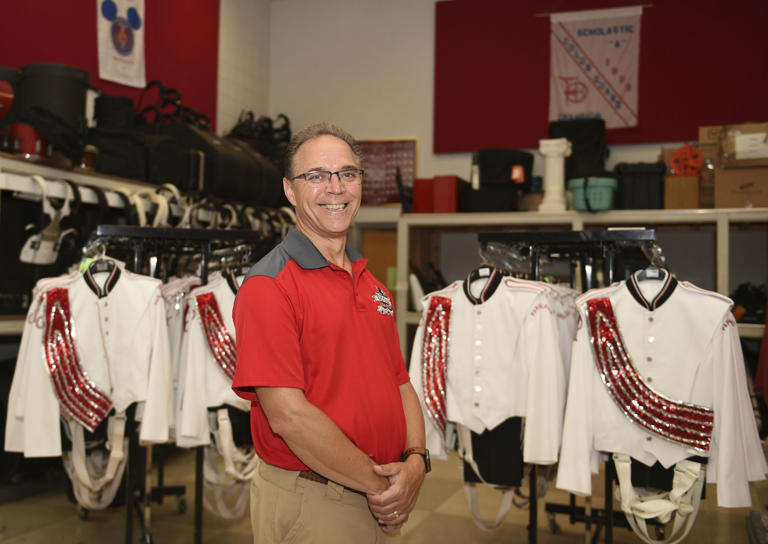 Born the son of a trumpeter and a former majorette, Jason Lerew’s career as a high school band director was predestined. Lerew recalls growing up in a “band family” in Boiling Springs, Pennsylvania, and watching his older brother, eight years his senior, play as a percussionist in the high school marching band. His parents regularly chaperoned band trips, he said, and as a young boy, he could hardly wait his turn to choose an instrument and join the band one day, too. Now, decades later, Lerew, 54, is an avid clarinetist and saxophonist who has been Parkland High School’s band director for more than 30 years.

The school community recently showed its appreciation for Lerew’s many years of service by helping him win the Barry Manilow Music Teacher Award. Lerew competed against eight other Lehigh Valley teachers from districts such as Allentown and East Penn. He came away with the most community votes, and as part of his prize, Lerew attended Barry Manilow’s concert at PPL Center Friday to watch the show and meet the man himself.

“He is just such a classy guy,” Lerew said after meeting Manilow. “For as big of a superstar as he is, he was just really down to earth, and it’s refreshing to see that, and just so generous for him to do this.”

Manilow has sold more than 85 million albums worldwide and is best known for songs, like “Copacabana,” “Mandy” and “Could It Be Magic.” Lerew said he remembers growing up in the ‘70s listening to Manilow’s greatest hits and hearing classic jingles Manilow wrote, like “You Deserve a Break Today” for McDonald’s.

Lerew said Manilow’s stage presence encouraged the crowd to sing along Friday night, and he enjoyed hearing the backstories to some of Manilow’s popular songs.

“When he sang, ‘I Write the Songs,’ he really explained where that came from,” Lerew said. “He got his start by his grandfather taking him to this booth in Times Square, where you could record yourself singing … and they actually showed a video of him as a young child with his grandfather … so that was really cool to get that background.”

The PPL concert was one stop on Manilow’s special six-show arena tour, “Manilow: Hits 2022.” A local music teacher, like Lerew, was chosen as a winner at each tour stop based on local voting. Lerew and the other winners will each receive $5,000 in “Manilow bucks”’ to buy instruments for their school’s programs, and an additional $5,000 cash prize.

“He was up against some real stiff competition,” Greg MacGill, the former Liberty High School band director and a friend of Lerew’s, said about the Lehigh Valley teachers who participated in the contest. “All those folks are quality individuals that he was competing against, so I think it’s a real feather in his cap.”

The tour contests were run through The Manilow Music Project, which Manilow created in order to donate instruments to high schools and to give university scholarships to students throughout the country.

“I really see this as an award for our band program, more than anything else,” Lerew said, noting some instruments he purchases for the school can cost up to $8,000.

He added that some of the marching band instruments, such as the sousaphone, which is a member of the tuba family, and the mellophone, the marching band version of a French horn, can suffer wear and tear more quickly from being played outside regularly.

Since Lerew started at Parkland, he has seen the number of students in the band more than double from 70 students when he first started to 180 today.

Lucy Schilling, a 2022 Parkland graduate, had Lerew for band class and said her mother Sue Schilling also had him as a teacher when she went to Parkland in the 1990s. Lucy Schilling, her mother and younger sister, who is also in the Parkland band, all voted for Lerew in the Manilow competition, she said.

“The best decision I’ve made was to stick with band, and Mr. Lerew was a big part of that,” said Lucy Schilling, who will attend Penn State University in the fall. She is currently in the process of auditioning to play the trumpet in the Penn State Blue Band.

“He was a great teacher, and if the teacher isn’t right, it’s hard to stay in something, even if you enjoy it,” she said. “It’s really the teacher that makes it what it is.”

Meredith Schmoyer, a rising senior at Parkland, plays clarinet in the band, and said Lerew’s guidance helped her earn first chair in the district competition last year for bass clarinet. He taught her what finger positions to use on the instrument and the importance of posture to breathing properly, she said.

“Mr. Lerew is great,” Schmoyer said. “He is very welcoming to everyone new and really wants everyone to have fun and do band and be passionate about band.”

Carole Lutte, the former band director at Easton Area High School, plays with Lerew in the Allentown Band, along with MacGill.

Lutte and MacGill both said they’ve seen Lerew’s success in growing Parkland’s band program throughout the years, as former band directors themselves, and added he’s a talented musician in his own right with the ability to sight read and fill in wherever the band needs him.

Lutte, who plays the clarinet, said she and Lerew often talk about their instruments, such as which mouthpiece they’re currently using. Lutte also said she appreciates how Lerew regularly asks for feedback.

“What keeps him in it, is that he knows that he’s got to keep learning as well,” Lutte said. “Jason has stayed in the pocket, because he’s constantly learning as well. Kids feel that, and they respect that.”

Lerew said his favorite part about his work is encouraging his students to keep music in their lives whether they pursue a professional music career like Manilow or not, he said.

“Music is a part of life and living,” he said. “If you really pay attention, it’s all around us, and if you would take that away, take that music out of our lives, I think it would be a very dull and dry life.” (Jenny Roberts, The Morning Call)